A Song for a Tradesmen Choir - Camden Art Centre

A Song for a Tradesmen Choir

A Song for a Tradesmen Choir

Artist Laura Eldret brings together a small group of tradesmen to create and  perform a folk song for the present day. The majority of folk songs derive from ways  of verbally attracting customers to buy their wares and services.

The new song combines issues from contemporary life and trade, and functions as a surreal advert for the individuals' skills. A Song for a Tradesman's Choir is performed in a stage-like set that exhibits the skills of the individuals in the choir, resulting in an appropriation of traditional folk music as a 'promotional mix' campaign for real tradesman operating in Camden today.

A Song for a Tradesmen Choir combines the styles of the sea shanty and antiphon which both employ  call‐and‐response musical patterns, evolved from speech patterns in  human communication.

The antiphon was a popular mode of song used in the mystery plays of medieval  Britain: plays that were originally performed in churches in the tenth‐century to  recount biblical stories, which later became popular forms of entertainment carried  out on the streets. The plays were originally acted out by communities of guildsmen,  who were employed by the church as readymade acting troupes before the rising  professionalism of players. The name 'mystery plays' is believed to have derived from  the term 'misterium', meaning craft; a play performed by craft guilds. 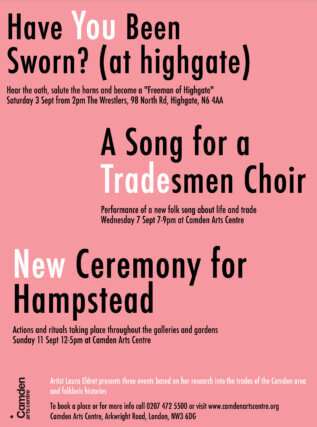