Camden Art Centre are pleased to host a discussion between Stephen Ellcock and Gina Buenfeld-Murley (co-curator and editor of the Botanical Mind exhibition and catalogue) to mark the launch of The Cosmic Dance: Finding patterns and pathways in a chaotic universe.

Ellcock’s new book presents a visual journey from the minute to the infinite. It explores the relationships and harmonies between all parts of the universe and inspires personal contemplation regarding our place.

The Cosmic Dance presents a pan-global collection of remarkable, arresting and surprising images drawn from the entire history of art to explore the ancient belief that the cosmos is reflected in all living things. A visual journey that begins with the microscopic, the particulate and the elemental, then explores the human body as a cosmos in miniature, the beauty of divine proportions and our search for spiritual enlightenment, before finally revelling in the colossal, the celestial and the infinite. Providing the reader with a guide to a deeper contemplation of the world around us, allowing readers, in the worlds of William Blake, to ‘see a world in a grain of sand, and a heaven in a wildflower, hold infinity int the palm of your hand, and eternity in an hour’.

Gina Buenfeld-Murley is Exhibitions Curator at Camden Art Centre, London where she has co-curated The Botanical Mind: Art, Mysticism and The Cosmic Tree (2020-21); A Tale of Mother’s Bones: Grace Pailthorpe, Reuben Mednikoff and the Birth of Psychorealism (2019); and solo exhibitions with Athanasios Argianas (2020); Wong Ping (2019); Yuko Mohri (2018); Joachim Koester (2017); João Maria Gusmão & Pedro Paiva (2015); Bonnie Camplin (2016) and Rose English (2016). Independent curatorial projects include Gäa: Holistic Science and Wisdom Tradition, at Newlyn Art Gallery and The Exchange, Cornwall, and Origin Story, at The Wäinö Aaltonen Museum of Art, Turku, Finland (both 2019). During a sabbatical in 2017 she was curatorial resident at Helsinki International Curatorial Programme, Finland and between 2014-2015, was curator in residence with Art Initiative Tokyo where she curated At the still point of the turning world at Shibaura House Tokyo, presenting work by Manon de Boer, Joachim Koester, Simon Martin, Ursula Mayer, and Jeremy Millar. She holds an MA in Art History (20th Century) from Goldsmiths College (2004) and was previously Director of Alison Jacques Gallery.

Stephen Ellcock is a London-based curator, writer, researcher, and online collector of images who has spent the last decade creating an ever-expanding virtual museum of art that is open to all via social media. His ongoing attempt at creating the ultimate social media ‘Cabinet of Curiosities’ has so far attracted more than 600,000 followers worldwide. He is also the author of All Good Things, The Book of Change, England on Fire, with text by Mat Osman, and Jeux de Mains, a collaboration with Cécile Poimboeuf-Koizmi. 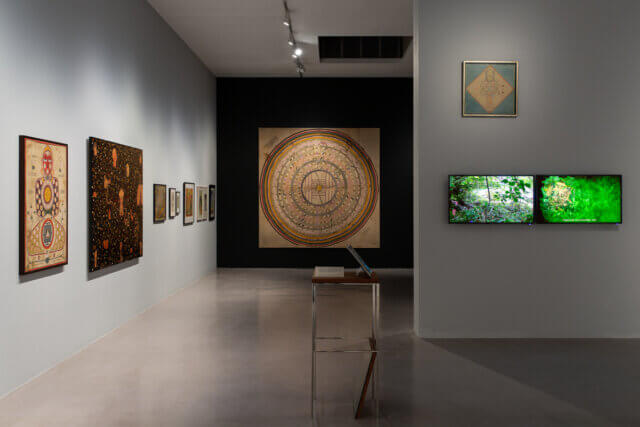