Untitled (America) 1994/95, comprised of garlands of lights installed across the street.

Like all Gonzales-Torres’ work, the piece is on one level concerned with the intersecting dialogues between the realms of public and private, social and personal. However, its intention is also to be decorative and celebratory. The work was installed opposite the Centre in Lymington Road. Gonzalez Torres who died in 1996, exhibited widely in America and Europe and showed alongside Ad Reinhardt and Joseph Kosuth in Symptoms of Interference, Conditions of Possibility at Camden Arts Centre in 1994. A large exhibition took place at the Serpentine Gallery, with satellite projects throughout London, 1 June – 16 July 2000. 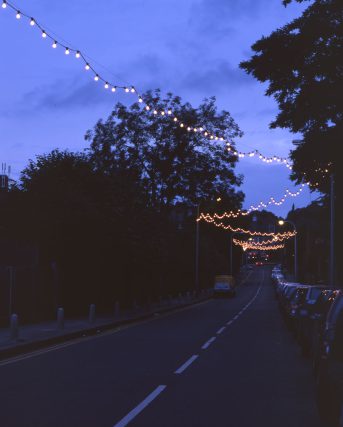