All art is received subjectively, but some art experiences are more subjective than others. Take Jim Hodges’ metallic cobwebs, exemplified by Hello, Again (1994  –  2003), an intricate and glimmering palimpsest of webs made from slender brass chains, pinned modestly in a corner. For some commentators, the American artist’s elaborate geometries denote the complex weave of human relationships, while for others they juxtapose beauty with inferences of bodily constraint. Such readings are not mutually exclusive, of course: in 1994, Hodges also made Chained, an ink-on-paper work spelling the word ‘Love’ in web-encrusted lettering. Furthermore, there’s no single ‘true’ reading to be had. Since One (1987), a sculpture made from charcoal drawings stapled in a ring which the viewer had to circumnavigate to take in, Hodges has adhered to Marcel Duchamp’s axiom that ‘the viewer completes the work’. What’s exceptional about his diverse art (sculpture, photography, text, mirror-works, painting, drawing and more) is the degree to which a viewer wants to do the completing, seduced by artworks that are at once beautiful and freighted with metaphoric potential.

If Hodges is a master of spacious poetic insinuation, however, his work nonetheless feels bounded: this is a generous art, but not a vague one. It operates within a specific emotional hemisphere, one pledged broadly to remembrance and wide-eyed engagement with life. It’s surely no accident that Hodges’ art found focus as AIDS was decimating the gay community. Nor that it used flowers, emblems of the transitory and the traditional tribute to the dead, in works such as A Diary of Flowers (1992 – 5): a work which at fullest stretch features 565 ink sketches of flowers on delicatessen napkins, made over three years. When Hodges began creating stitched curtains of silk flowers suspended in open space, beginning with Every Touch (1995), the works felt like veils, thresholds between here and elsewhere. It mattered that they alluded lightly, loosely, leaving interpretative space by conflating minimalist and post-minimalist aesthetics with materials that wish mutedly for the transient to be preserved. A fake flower will never die; life’s crosswinds will never trouble the tremulous vectors in a metal cobweb.

Celebrating life’s cherishable epiphanies (‘every touch’), and regretting their finitude: these are co-dependent concerns. In the midst of life we are in death, says the Book of Common Prayer; the inverse is also true. This emphatic temporariness feels fundamental to Hodges’ art – whose very refusal to settle down formally speaks of ubiquitous change and undoing, the one-way street of mortality — and is tied to a counterbalancing avowal to maximise the moments zooming past. (Hodges was struck early on by Jean Genet’s Our Lady of the Flowers (1943), whose author takes pleasure in the tiniest sensual details: e.g. a billowing blue ribbon. ‘I felt such identification with his nature’, the artist has said.) Slower Than This (2001), one of Hodges’ numerous text works, this time using letters cut from photographs, is a sequence of descriptions of place, time and atmospheric conditions that builds ambivalently to phrases like ‘it had begun like any other day’. Two-dimensional works using spectrums of colour, such as the grid of tiny Pantone chips, As close as I can get (1998) and its cousin, Satellite (1998), offer chromatic sunbursts of pleasure undercut by instability: one can’t hold onto a sense of dominant colour, each shade being undercut by its neighbours. The grid of light bulbs that is Just This Side (1999) lights up and extinguishes itself in groups over the course of a day; the series of abstract drawings On the Way Between Places (2009), made from charcoal moistened with Hodges’ saliva, seemingly underline the inevitability of passage for carbon-based life.

The materials are often commonplace: an argument for beauty’s abundance, if we would but look. (Even when Hodges uses high-end materials, as in the series The Good News (2005 –) in which he covers the
entirety of a newspaper’s pages in gold leaf, it is the everyday that is transfigured and opened up.) They also speak of the rich prospective meaningfulness of the familiar. Camouflage, a latterly favoured motif, is exemplary of this. In the mural Oh Great Terrain (2002), Hodges painted a wall with a camouflage design reworked as a vortex, and hung upon it a photograph of a plane tree’s trunk speckled with an almost identical bark pattern. Camouflage here (and in the later near-monochrome variants of the work in black and white) semaphores life at a remove — like a silk flower — but it also suggests the dream of humankind merging wholly with nature. That merging might be a vanishing, the work’s plughole dynamic suggests, and it’s furthermore hard (given when the work was made) not to conflate camouflage with warfare and the Iraq invasion. In See I (2003), where the merging is made literal — here, a camouflage pattern is incised in outline on a large two-panel mirror —
the work resonates with additional ideas of selfhood-as-disguise, while the changing light on the mirror’s surface suggests the passage of time, and the instability of all things.

As these associations ping-pong around, asking to be reconciled, the ensuing sense of one’s own synapses at work is, itself, a kind of celebration of aliveness: of engaged cognitive facility. Not for nothing do Hodges’ mirrored works — such as See I and the beautifully economical cartoon explosion created by radiating shards of mirror in Untitled (near and far) (2002) — emphasise the watcher. For the most touching aspect of Hodges’ art may be the way it reframes the Duchampian permission to participate as a warmly human relationship between artist and viewer. One of Hodges’ most miraculous pseudo-floral works, a kind of funereal rope trick in which silk flowers snake improbably up a hidden wire from a circular, wreathlike array on the ground, is entitled A Line to You (1994). The ‘Line’ is another hopeful vector, like a silk line spun by a spider from one point to another, but what about the ‘You’? As has been noted, Hodges’ art feels deeply personal but never quite autobiographical, and therein lays its affective power. If this ‘You’ remains unfixed, it surely refers, at least in part, to we who augment his subtle, tender artistry with our thoughts.

Jean Genet Our Lady of the Flowers Grove Press (1943)

‘... the world has all that you need, you have the power to attract what you wish, wish for health, wish for joy, remember you are loved ... I love you’ - Yoko Ono Yoko Ono

Martin Herbert is a writer and critic based in Tunbridge Wells. He is associate editor of ArtReview and regular contributor to Artforum and Frieze 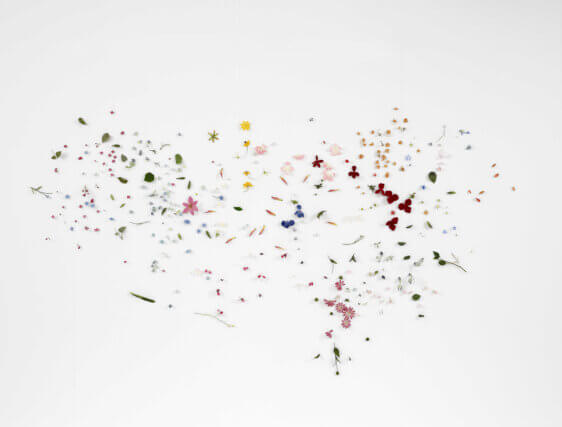