Bruce Lacey was famous when I first saw him as a school girl more than 50 years ago. He was on the Simon Dee Show on TV, demonstrating his new, old-fangled, pancake machine one Shrove Tuesday. Flour, eggs and milk were dumped in a funnel at one end and after a lot of gurgling, the mixture fell into the frying pan at the other end. Bruce pressed the button, the pancake was tossed mechanically and hey presto! Bruce and Simon had their pancake and my mum made mine.

I had seen Bruce even earlier but not known it. ‘Monty’, Field Marshall Montgomery of Alamein, had a TV series in the early 1960s on his Eighth Army Campaigns in World War Two, culminating in El Alamein. My dad spent four and a half years in Egypt and Palestine and he would get angry and wistful watching Monty’s maps and models. Comedy in the 1950s was often about the War, The Goons, Spike Milligan and Michael Bentine’s TV show It’s a Square World 1960–64. Bentine ‘sent up’ Monty, with a table covered in sand as his battlefield, with the sound of bombs dropping all the time sending the sand flying, more and more uncontrollably. My father was in tears of joy. Someone understood his pain. The props man under the table making the sand fly was ‘Professor’ Bruce Lacey.

Bruce had studied at the Royal College of Art (RCA) after the War. He wrote two articles for Ark magazine. ‘Other People’s Attics’ spring 1954, listed 1409 items he had collected, including his first Magic Lantern and 1006 Magic Lantern Slides. He was a painter at the RCA with the generation that became known as the Kitchen Sink Painters including Ed Middleditch and John Bratby. His generation were shattered by their experiences of war, broken by the bombing of European cities. Like Kurt Schwitters in Hannover and Cumbria, they made a mad sense of war through their Dada works. Another article Bruce wrote for Ark, with his own drawings, was ‘The Macabre in Italy’ with graphic images of the dead in Cappuccini Cimitero Rome and the 8000 skeletons in the Capuchin Catacombs, Palermo. He remembered climbing over a railing to put the four cornered hats straight on the skeletons. He had first seen them in a Victorian book of photographs he had picked up in his youth.

I met Bruce in 1970 during the installation of the exhibition Ten Sitting Rooms at the ICA where I worked from 1969 to 1971 turning the catalogue desk into a bookshop. He was one of the artists making an installation for Jasia Reichardt’s exhibition that included Andrew Logan’s first exhibition. The ICA show was probably inspired by Ed Keinholtz’ 10 Tableau then touring around Europe from Pontus Hulten’s Moderna Museet in Stockholm and nine of the ten tableau ended up at the ICA in 1971. Keinholtz and Lacey shared much in common: second hand furniture, dismembered mannequins and memories of armies, brothels and War Memorials.

Bruce’s installation was a small, dark, cosy, domestic, interior with a Christmas cake on the centre of the table with the first slice cut out. The slice continued through the whole room, and you could see into the figures, the father wanking with his wife’s knickers, the mother with a black foetus in her womb. Bruce had won an RCA travel grant to the Middle East, where he’d watched the foundations of a block of flats being built on a cemetery in Turkey, the foundations cut through the remains of dead bodies.

Tony Reichardt was originally an ad-man, and he showed Bruce’s classic exhibition of assemblages at Marlborough Fine Art on Bond Street in 1965. I never saw the show but in the early 2000s, Bruce brought three of his robotic assemblages to exhibitions at the Norwich Gallery, NUCA. Then there were all the cabaret shows, Bruce Lacey and The Alberts in An Evening of British Rubbish at the Establishment Club, sending up the pomposity of Empire, the army, the Union Jack and all that. They were taken up by Lenny Bruce, who wanted to be their manager. Jean Tinguely also wanted to work with Bruce and they made a chaotic performance together at the ICA on Dover Street. Nigel and Judy Greenwood invited me on a Sunday evening in the early 1970s to see Bruce Lacey and the Alberts upstairs at the Royal Court Theatre. It was a lunatic evening — with music. Bruce wore his homemade moon suit and helmet. The Alberts were of course as Edwardian as ever.

I remember meeting Bruce again at the SPACE studios in Martello Street where he was the resident caretaker. An image of the amazing studio he occupied there was shown on the front of his Whitechapel Gallery 1975 catalogue. I went to early showings of his films. The Toilet Seat film is as indelibly printed on my memory as the toilet paper lining of the toilet seat was embossed on the artist’s bum. (What is the connection between the pomposity of Military Empires and potty training?)

When I went to Norwich in 1980 Bruce lived nearby in Wymondham and he made an exhibition at the Norwich Gallery billed as Jill Bruce and Bruce Lacey A Year Round the Bury St Edmunds Zodiac & Moments of Sunrise from 17 April to 16 May 1981. It was a hippy, pagan, green environmental work with a performance in the quadrangle between St Andrews Hall and the 19th-century Art School.

In 2000 I planned a touring exhibition including the curious, important artists in Norfolk and their Dada roots: Nigel Henderson; Colin Self; and Bruce Lacey. It was meant to reflect the start of their work  in anti war concerns and experiences of WW2, just as the Dada artists had been inspired by WW1, hence the title Things. I worked on it with Kryztof Fijalkowski. We held a conference and Bruce came running onto the stage wearing a flying suit and his latest flying helmet and stole the show. We instigated the sale of his two robots from the Things exhibition The Womaniser, 1966 to Tate and Old Money Bags, 1964 eventually to Leeds Museums and Art Galleries.

In 2002 I organised a touring exhibition of the Andrew Logan Alternative Miss World Film Show 1972 to 2002 with a wonderful Norwich Gallery Dispatch 082. Bruce won the Alternative Miss World in 1985 with his Robot R.O.S.A. B.O.S.O.M., 1965 and he made regular lunchtime performances in the Norwich Gallery with her. He could electronically command ‘Rosa’ to press her lips against yours… if you stood close enough!

Bruce came to my 60th Birthday party in the Norwich Art School Bar, Still at Art School in 2007. A few months later he invited me to be a judge, with Andrew Logan and Robert Short, at his own 80th Surreal Fancy Dress Birthday Party at the Norwich Art Centre. That summer Tasha Amini came to Norwich to make an installation for EASTinternational. Jeremy Deller came with her and I encouraged him to see Bruce Lacey’s retrospective exhibition My Life in Therapy at the Norwich Art Centre. He bought a photo of the 1970 ICA installation and Jeremy has never stopped coming back to visit Bruce.

Lewis Milestone (Dir.) All Quiet on the Western Front (1930)

‘This is only the tip of the iceberg’ Bruce Lacey

Bruce Lacey (b. 1927, London) studied at Hornsey School of Art from1948–51. From 1951–54 he studied painting at the Royal College of Art (RCA), London where he also began performing in variety and revue theatre. In the late ’50s, Lacey designed set and costumes for television, working with Spike Milligan, Peter Sellers and Michael Bentine.
In 1958 Lacey joined Bob Godfrey and Joe McGrath in forming The Gnits and satirical musicians, Tony and Douglas Gray as The Alberts, with whom he would perform the stage comedy act An Evening of British Rubbish throughout the ’60s. In 1959 he collaborated with Jean Tinguely on a performance at the ICA, London. In that same year he began a 20-year professional and personal partnership with Jill Smith (who would later become known as Jill Bruce). In 1960 Lacey appeared alongside Spike Milligan, Peter Sellers and Leo McKern in Richard Lester’s The Running, Jumping and Standing Still Film. In 1962 Ken Russell made a documentary about Bruce Lacey, titled The Preservation Man, an instalment of his BBC Monitor series. As part of the Group H collective, Lacey performed with Criton Tomazos and Jeff Nuttall in the sTigma Environmental Exhibition at Better Books, Charing Cross Road (1965) alongside John Latham, Jeff Nuttall, Barry Flanagan and Bob Cobbing. Throughout the ’60s, Lacey made assemblages and automata, including R.O.S.A. B.O.S.O.M. who would go on to win the Alternative Miss World contest in 1985. In 1968 he was included in Cybernetic Seredipity at the ICA, London and created the environmental, participatory, installation the Humanoid. In the ’70s Lacey began to move into community arts, devising children’s events and performances as well as two outdoor installations at the Serpentine Gallery: The Laceys at Home; and Indian Life. In 1974 Jill Bruce and Bruce Lacey began work on Stella Superstar and Her Amazing Intergalactic Adventures as they moved towards song-writing for The Galactic Theatre. In 1975 Lacey had a solo exhibition at the Whitechapel Gallery, London: 40 Years of Assemblages, Environments & Robots. From 1976–81 the Laceys participated in 11 Albion Fairs in East Anglia and made ritualistic performances in and around ancient sites in the UK. In the ’80s Lacey began to make large-scale ‘ritual paintings’ which he exhibited at Manchester City Art Gallery in 1987 and The Showroom, London in 1985. After a solo show at GoMA Glasgow (1996) where he produced a large-scale multi-media installation, his most recent exhibitions include: Art & the ’60s: This Was Tomorrow, Tate Britain (2004); Bruce Lacey: My Life in Therapy (exhibition), Norwich Arts Centre (2007); Bruce Lacey: A Silly Bugger Artist’s Life at the Taxpayers Expense (performance), Norwich Arts Centre (2011); and United Enemies: The Problem of Sculpture in Britain in the 1960s and 1970s, Henry Moore Institute (2012). In September 2012, Lacey will perform at Wysing Arts Centre, Cambridge.

Lynda Morris is a curator, writer and Professor of Curation at Norwich University College of the Arts.

The exhibition has been supported by The Henry Moore Foundation and University of Sussex, Falmer. 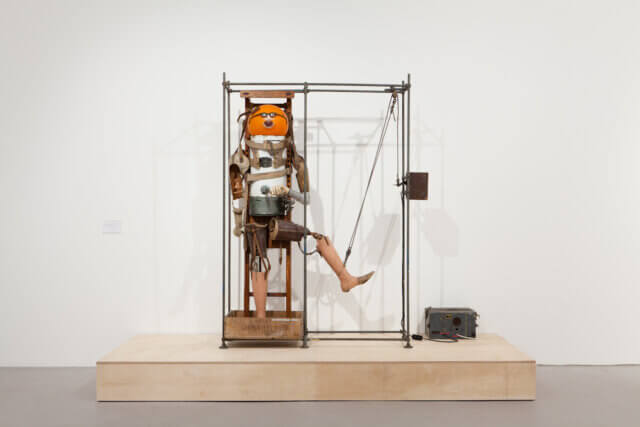