Abstract painter Giorgio Griffa, closely linked to the Arte Povera movement, first became known in the 1960s as part of an Italian generation of artists who sought to radically redefine painting.

Believing in the ‘intelligence of painting’, Griffa allows the essential elements of his process, such as the type or width of the brush, the colour or dilution of the paint and the nature of the canvas, whether linen, cotton, hemp or jute, to influence and form the work. Griffa’s approach is performative and time-based – often working horizontally on the floor, his rhythmic, formal gestures soak into the unprimed and unstretched material. Griffa’s minimal and primordial marks extend from his fascination with quantum energy, time-space mathematics, the golden ratio and the memory of visual experience since time immemorial. Suggesting the ongoing and organic life of the painting, lines and brushstrokes are deliberately cut short and the canvas is never filled; never a finished or complete object, but a process viewed in the moment.

This exhibition spanned the breadth of the artist’s practice, incorporating works from the 1960s through to today.

Listen to a playlist created by Giorgio Griffa for the exhibition:

An evening for educators to visit the new exhibition Giorgio Griffa: A Continuous Becoming, take part in an informal tour of the show, and find out more about the Camden Arts Centre education programme.

The team will launch the new Educators’ Resource, a guide providing activities and conversation ideas for students of all ages, designed to aid educators in structuring a visit to the centre and in planning related lessons.

This event is suited to teachers and anyone working in arts and education.

Poet and academic Richard Parker leads a talk on the economy of arts referenced within Ezra Pound’s The Cantos, an important influence on Giorgio Griffa’s work. With a focus on craft, Parker looks at how Pound’s early experimental texts informed the famous poem and its typographic distinctiveness.

Parker will introduce the context, history and methods Pound employed in fashioning his epic modernist poem, with a particular emphasis on Pound’s concerns about typography and the physical manifestation of his poem through its different iterations. The talk will also consider the influence of artists such as Henri Gaudier-Brzeska and Wyndham Lewis on Pound’s work and look at the ideogrammic method, a technique developed by Pound which allowed poetry to deal with abstract content through concrete images.

Richard Parker teaches at Birkbeck College, University of London and the University of Surrey. He is the founder and co-organiser of the London Cantos Reading Group and has written on the poetry of Ezra Pound and other modernists. He is also the printer and editor of the award-winning Crater Press pamphlet series, publishing innovative British poetry in letterpress and other formats.

Quantum physicist Dr Suchitra Sebastian will lead a talk on our relationships to patterns, organising principles, and our understanding of objects’ material behaviour. She will consider how these ideas are harnessed through her research and approaches to thinking about unknown quantum matter.

This event has been programmed alongside Giorgio Griffa’s exhibition A Continuous Becoming looking at his interest in quantum physics and its influence on his ways of working.

Dr Suchitra Sebastian holds an MS and PhD in Applied Physics from Stanford University, and an MBA from the Indian Institute of Management (Ahmedabad). She is currently University Reader in Physics at the University of Cambridge. Suchitra was recently named as one of thirty ‘Exceptional Young Scientists’ by the World Economic Forum and one of the top ten ‘Next big names in Physics’ by the Financial Times. She received the L’Oreal-UNESCO fellowship for women in science, among other awards.

Curator Sophie Williamson leads a tour on the final day of the exhibition. 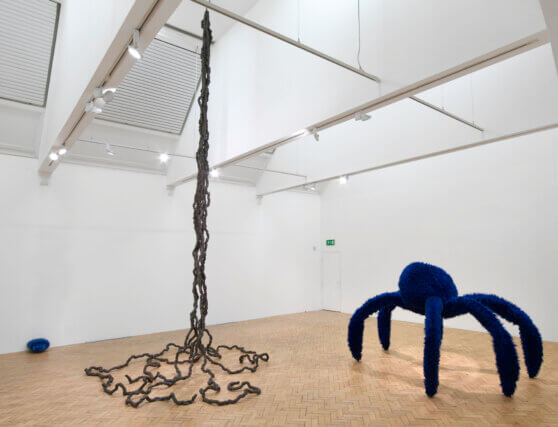