Along the Way - Camden Art Centre

Along the Way was a focussed survey of the work of influential American artist Kerry James Marshall, from the 1980s to the present.

Living and working in Chicago, Marshall’s paintings, drawings, prints and installations, draw on African American history and popular culture, as well as Western art history and classical mythology, to create what has been described as a ‘meditation on black aesthetics’. Marshall’s powerful works skilfully build on, and challenge, art historical genres, both to tell the story of African Americans and to create a dignified place for the black figure to exist within the mainstream of art.

Marshall’s principal subject is the black figure, which he injects into the mainstream of Western painting where previously it has been peripheral. The issues of racial representation and, in particular, invisibility first emerged in his early collage works, leading to paintings such as Two Invisible Men Naked (1985), whilst stylised portrayals of black beauty are presented in a series of paintings from the early 90s, among them Blue Water Silver Moon (Mermaid) (1991) and So This is What you Want? (1992).

Chicago’s vast urban 1960s public housing projects provide the inspiration for the paintings from The Garden Project series (including C.H.I.A., 1994), which acknowledge the grim realities of existence in these failed social housing experiments whilst celebrating the daily lives of their residents. Other works from the American Dream series of the same period, including Campfire Girls and Scout (Boy) (both 1995), present a utopian vision of the black middle-classes’ social mobility explored through their leisure time.

The Lost Boys is a series of portraits of ‘lost’ youth, the figures’ heads surrounded by halos as though in religious icon painting. Similarly, the murdered icons of the Black Civil Rights movement are commemorated in the elegiac Souvenir series of collage paintings from the late 1990s.

Kerry James Marshall: Along the Way was accompanied by a fully illustrated catalogue with texts by Luc Tuymans and Valerie Cassell Oliver and an interview with the artist by Deborah Smith. The exhibition was curated by Deborah Smith. 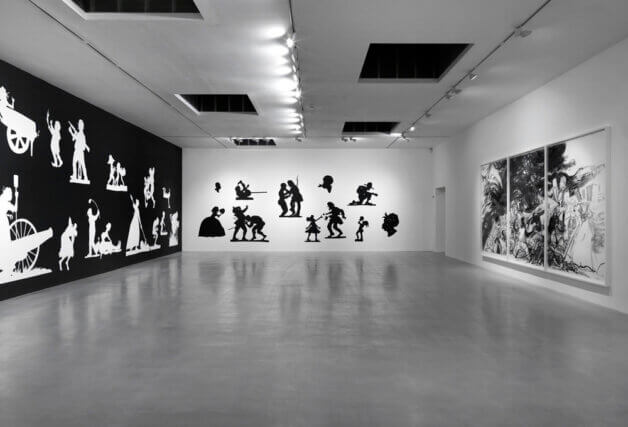