PEER FORUM is an annual mentoring programme set up by Artquest aiming to assist artists by providing them with the funding, space and resources necessary to establish their own peer mentoring groups. Working in partnership with a number of London’s most respected art spaces to host these groups, the programme gives participants the opportunity to build relationships with their host organisation. Camden Arts Centre is delighted to once again be hosting a mentoring group over 2017/18 following a successful partnership in 2016/17.  Through the PEER FORUM programme, we provide institutional support and create a space for the artist to instigate dialogue and expand ideas and research.

The artists will be blogging about each of their sessions:
Blog 1: PEER FORUM: Introductions
Blog 2: PEER FORUM: From the V&A Collection

Lead Artist:
Alicia Tsigarides (b. 1988) is an artist living and working in London. She graduated from MA Sculpture at the Royal College of Art in 2016. Her practice explores ideas of excess, desire and the body through sculpture and writing. Recent works have explored the contemporary Baroque and means of replicating the exquisite moments she finds everywhere, including emotive love songs and bittersweet life experiences. Using silk, exotic woods, precious metals and imagery, her process involves carefully remaking and editing elements to highlight the suggestive or spiritual. She has been selected for residencies at the Scottish Sculpture Workshop (2014) and Cite Internationale des Arts, Paris (2015). Recent group exhibitions have included Creekside Open (2017), Sweat at Camden Arts Centre (2016) and The Kiss at Blyth Gallery (2016). Read more

Leah Carless (b.1982) works between London and Birmingham. Working predominantly in sculpture, her work is driven by questions about making, materiality and their emotive qualities. Works occupy a space between landscape and body taking on both solid and fluid states. The work investigates notions of physicality in contemporary society; that of consumer culture, environmental uncertainty and what it means to have a fleshy body in a culture saturated by visual imagery. She graduated with an MA sculpture from the Royal College of Art in 2016. Recent exhibitions include Two Queens, Leicester (2017), KH7, Aarhus, Denmark (2016), Copperfield Gallery, London (2016) and Division of Labour, London (2016). Bloomberg New Contemporaries, Bluecoat, Liverpool and ICA, London (2016). She will be taking up artist in residence at The New Walsall Art Gallery in early 2018. Read more

Katharine Fry (British, b. Belgium 1981) works in video installation with a background in performance. Marrying a mid-century aesthetic with a gothic strategy, Fry’s primary character is a female figure contained in an interior space. Seeming barely alive, her vitality is only registered through blinks and breaths as she carries carry out arbitrary and ultimately purposeless tasks. Fry’s work is permeated with ambivalence with her character appearing physically caught between enclosure and protection, psychically lingering between inertia and withdrawal. Through a feminist process, Fry turns her interest to enmeshment and individuation, automatism and interiority, strategies of in/action and pathologies of development.  She is currently completing House Arrest, a practice-based PhD at Goldsmiths, and is a Creekside Open 2017 prize-winner. Read more

Rebecca Jagoe gained an MA in Sculpture from the Royal College of Art, London (2016). Jagoe’s practice presents the uncertainties of queer subjectivity under contemporary late capitalism. Working across performance, text and object, their work is a material memoir examining notions of body, self, and subjectivity from the perspective of queer femme identity. Beginning formally with research and writing, their sculpture and performance emerge from this through their interest in how these disciplines can coexist within singular works. Their research has engaged the aesthetics of high fashion and its relationship to femme identity, and the performance of femininity. Addressing the theatrics of self-presentation and sexuality, their practice proposes that the performance of these can be formative. Drawn to strategies for dismantling binaries, they challenge ideas of interior vs exterior, intellectual vs physical, and natural vs cultural, body vs mind. Read more

Olivia Brazier is a London based artist working predominantly in collage and painting. She explores how the female body is objectified alongside consumable goods. In her recent series of works, ladies from porn magazines are found engaging with images of foods from supermarket catalogues, blurring the line between hunger and sexual appetite. These works are mounted onto linear paintings, a language that Brazier often uses to map observations of her surroundings. She is a founder and member of Your Beautiful Collective, working to create alternative spaces for artists to exhibit work within and outside of the contemporary art sphere. Recent exhibitions include: Nasty Women, Cross Street, Wigan (2017); Junk in the Trunk, a traveling exhibition around London, (2017) and Future Late, Tate Modern, London (2016). Read more

Annie Attridge graduated from the Royal Academy Schools (2002) and BA in Painting from the University of Brighton (1999). Using porcelain, Attridge creates a universe of caves, mounds and entrances into flesh that exit into limbs, breasts, and flowery decadence. Her work is currently included in the touring exhibition Nature Morte, Guildhall Museum, Norway, Sweden and London. Solo exhibitions include Should of Could of Would of, MOCA London (2016) and Wanderlust, Asya Geisberg Gallery, NY (2013). Read more

Alicia Reyes McNamara received her MFA from Ruskin School of Art, after completing her BFA at California College of the Arts. Her work has been included in Bloomberg New Contemporaries 2016, Bluecoat, Liverpool and ICA, London. Reyes McNamara was awarded the South London Gallery Graduate Residency 2016-17 and her exhibition Nowhere Else was exhibited at the gallery in 2017. Her work will be included in the forthcoming exhibition Language of Puncture, Gallery101, Canada. Alicia is originally from Chicago and is currently based in London. Read more

Tenant of Culture (b.1990) is the name of Hendrickje Schimmel’s artistic practice. Schimmel uses this name to refer to her position as a cultural post producer rather than autonomous creator. Having recently graduated from Royal College of Art with an MA in textiles, her background in womenswear largely determines her subjects of interest and choice of material. The central object in her practice is the garment; found, made, wearable or sculptural. In her work, she examines the notion of the institutional archive; its functions and themes such as preservation and decay, storage, display and cultural hierarchy. The question that fuels her research is: how do we determine what should be saved, stored, preserved and protected? Using the phenomenon of fashion as an allegory for the transient, she looks at the contradictory relationship between the archive and trend, the fleeting and contingent versus the durably preserved. Read more

Terror Has No Shape

Join the 2017/18 PEER FORUM artists and invited guest Jala Wahid for an evening of discussion, performance and readings in response to the feminine grotesque.
The event will be accompanied by a DIY publication. 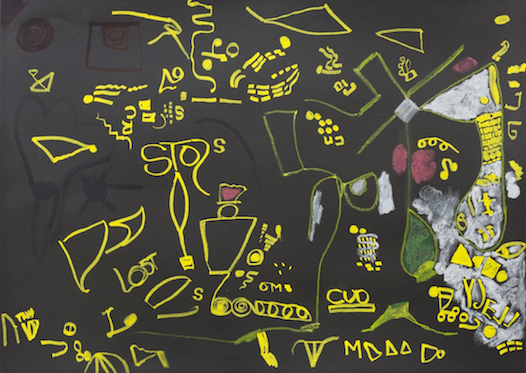