In partnership with Artquest.
Artquest

A sharing of ideas on collective affection, ecology, technology and agency as explored by participants in our Peer Forum 2020 programme.

‘I recall intimacies that I share, challenge, negate with others, intimacies that allow new and alternative stories to be told. In this process, I began exploring the importance of collective affection and how it can organise our beings. The enormous power of symbiosis, seems more urgent than ever. Let’s go back to the cells, to the ability of different organisms to live together and share roles. Its etymology literally comes from ‘living’ and ‘together’.’ – Application for Peer Forum 2020

The 2020 iteration of Peer Forum was in operation from 2020-2022. In that time and with no particular aim, they developed a way of working collectively. Its 14 members met and shared, sometimes in person but mainly via their various laptops and phones on various bed sheets and pillows that smell of their various washing detergents. They didn’t really make anything, rather material was accumulated as it does through a commitment to meeting and sharing. They sat still together, walked down the street, played word games and showed secret sub ankle tattoos. There’s was lots of time spent and as with life, there were times that were drawn out and times that were very special; in these special moments the group walked and talked as one.

Over two days, the group presented their collection, a language of symbiosis as well as techniques and methodologies in meeting and sharing.

Ikebana, the Japanese art of flower arranging, aims to bring out the inner qualities of flowers and other live materials to express emotion. A microcosm that represents the entire universe, in which considerations of colour, line, form, and function guide the construction of a work.  In this session the group invites participants to discover the inner relationship they hold with others by creating an Ikebana of Senses through words and shapes, using your feelings rather than your head.

Pauline Oliveros was composer and a musician, she was part of the San Francisco Tape Music Centre (SFTMC), and a beacon for experimental creativity. For this session the group invites participants to experience one of Pauline Oliveros’ “Sonic Meditations” exercises, which she started in the 1970’s with the ♀Ensemble, a women-only group of lesbians and non-lesbians

Members of Peer Forum invite audiences to a live audio-visual improvised reading on collective affection, ecology, technology and agency.  The selected readings are extracts from texts and conversations collected by the group throughout their two years of gatherings both on and offline.

Through a series of writing prompts and collective text-collaging techniques, the group invites audiences to explore ways to collectively process the experiences, reflections, and moments of tenderness that have passed through us collectively during these past two years.

This session focuses on Morton Garson’s Mother Earth Plantasia synth album from 1976 and Castle If’s Plant Material (2017) which was made as a response to Garson’s original album.  This collective listening session invites participants to consider how to care for houseplants through a beautiful collection of songs which capture the essence of a family of houseplants.

Connected to the Listening for houseplants session earlier in the day, this workshop will engage with exercises that open channels of human-botanical communications through drawing, writing and meditation.

The film above was produced by the artists of our Peer Forum 2020 programme. A Love Affair is a series of letters exploring the amorous relationship we cultivate with other organisms and was curated by Lou-Atessa Marcellin for Theatrum Mundi, a centre for research and experimentation in the public culture of cities based in London and Paris.

Listen to the Collective Display of Affection playlist.

Miriam Austin is an artist based in London. She graduated from the Royal College of Art with an MA in Sculpture in 2012 and is currently studying towards a PhD in Fine Art at the Ruskin School of Art, University of Oxford (Studentship funded by the AHRC). Miriam’s current research explores the relationship between ritual, myth, ecological fragility, and the politics of the body.

Naz Balkaya is a Turkish artist-curator based in London, a graduate from MFA Curating at Goldsmiths University. Her projects generally promote collaboration, solidarity and safe networking, representing the millennial conditions and supporting the emerging cultural producers. Currently, Balkaya works as an assistant curator for Performistanbul and represent them within the UK. Artistically, Balkaya works through her artistic and curatorial collective, Panicattack Duo, which she established with Cypriot artist Emilia Demetriou in 2014. Panicattack mostly work with performance, video and photography, but also curates a series of performance exhibitions.

Harry Bix is the founder and producer of his art practice East Anglia Records and is a Lecturer in Landscape Architecture at University of Greenwich. He is the recipient of the Derek Jarman Scholarship, Slade School of Fine Art (2014) and the Betty Mclean Award presented by Bruce Mclean (2016).

Lea Collet’s work vacillates between collaboration, performance, installations, video and fiction. She stares into plant contact and communication, digital connectivity, group relationship and technology as a potential for allowing people to escape the limits of their material bodies. Lea trained at Camberwell College of Arts, London at BA level followed by an MA at Slade School of Fine Art, London. She often works collaboratively with Marios Stamatis.

Guendalina Cerruti is a London-based visual artist born in 1992 in Milan. Through her installations Guendalina create domestic-related micro-universes dense of sentiment, sarcasm, cynicism and psycological deepth, where decorative and subjective collapse merging in new system of visual communication between reality, representation and immagination. In Guendalina’s work objects, images and text exploring the personal and the popular, are carefully organised into arrangement whose complexity is often derived from the use of repetition, symbolism and scale.

In sculptures, videos and performances Rosa Doornenbal explores how commercialisation of ways of caring for the human body changes experiences of physicality, intimacy, and sexuality. She is interested in how objects for care and support can shape and control subjectivity and gender norms. She graduated from Goldsmiths MFA Fine Art in 2018 and BA Fine Arts at Gerrit Rietveld Academy in Amsterdam in 2013.

Roxman Gatt (b. 1989, Mosta, Malta) work encompasses, text, painting, 3D, video, sound, photography, sculpture, installation and performance. Roxman’s research explores sexuality, identity, gender and consumption. Most recently the artist has been working with themes of humanising and interacting with consumer objects. Making the inanimate iconic and fetishised. Mundane aesthetics and the internet become both a tool and a trigger to produce work.

London-based Russian artist Maria Gorodeckaya. Her work sits at the crossroads of writing, performance and sculpture as an investigation into the power dynamics within which identities are determined through both affective and affected bodies. Maria graduated from the MFA Fine Art, Goldsmiths University of London (Sept 2013 – Sept 2015)

Zaiba Jabbar is a moving image artist, award-winning director, independent curator and founder of Hervisions. With nearly a decade of experience of working in the creative, music and media her curatorial practice is an investigation into how people on the margins are using technology to create art outside of traditional formats, mixing high and low culture and making space for themselves through the experience of expanded moving image.

Natalia Januła is an artist and archivist based in London and Warsaw. She studied linguistics and Photographic Arts at Westminster University followed by Fine Art at the Slade School of Fine Arts. Her practice consists of mixed media assemblages, sculpture, video, photography, speculative wearables, CGI and performative elements. Her works explores the female body, the natural world and material phenomenology. It equivocates between the organic and synthetic, often simulating entities whose physiologies include both technological and biological components. 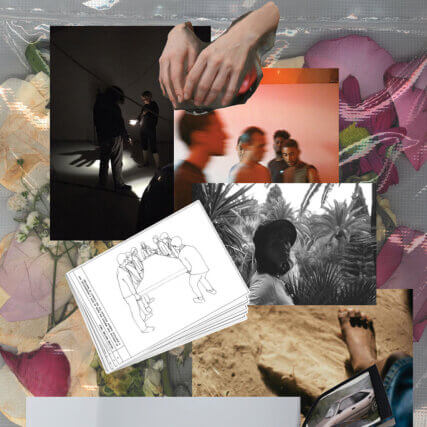