On the occasion of the exhibition, Cuts in the Day at Camden Art Centre, Dani and Sheilah ReStack discuss a range of formal and tactile considerations embodied with the assemblages on display and interconnections with spiritual practices, parenting and queerness with Daria Khan (Founder and Curator of Mimosa House).

Conversations The Artists Cuts in the Day

Daria Khan is a founder and curator of Mimosa House, an independent non-profit project space in London. Khan is an independent curator who graduated with an MA in Curating Contemporary Art at the Royal College of Art in 2013. Her exhibitions and projects have appeared at MAST Foundation (Bologna), the Austrian Cultural Forum in London, Photographers Gallery (London), and the 5th Moscow Biennial, among others. Co-curated exhibitions and projects include The Royal College of Art and Bloomberg New Contemporaries Film Salons at the ICA (London). Khan was also a curator-in-residency at MuseumsQuartier (Vienna) and the Palais de Tokyo (Paris). She has been a visiting speaker at Centre Georges Pompidou (Paris), the School of the Art Institute of Chicago, and at Christ Church College, Oxford University.

Dani and Sheilah ReStack have embarked on an artistic relationship that is formally and emotionally adjacent to their domestic lives, a quotidian zone they share with their daughter Rose. Both artists have established careers on their own. Neither Dani’s video work or Sheilah’s multimedia performance and installation work could exactly prepare us for the force of the women’s collaborative efforts. – Michael Sicinski, Cinema Scope, 2017.

ReStack collaborations have shown at the 2017 Whitney Biennial, Iceberg Projects Chicago, Toronto International Film Festival, Images Film Festival, Toronto, Lyric Theater, Carrizozo, NM, The New York Film Festival CURRENTS, Leslie Lohman Project Space, Gaa Wellfleet and The Columbus Museum of Art, Ohio. They have received grants from the Canada Council for the Arts, and the Hanley Award. They have been residents at The Headlands and the MacDowell Colony.

Cuts in the Day

Cuts in the Day is the first institutional exhibition in the UK by Dani and Sheilah ReStack (b. 1972, Columbus, Ohio; b.1975, Caribou River, Nova Scotia). Produced especially for Camden Art Centre, it expands and develops the artists’ exploration of queer desire, family, climate crisis, and collaboration. 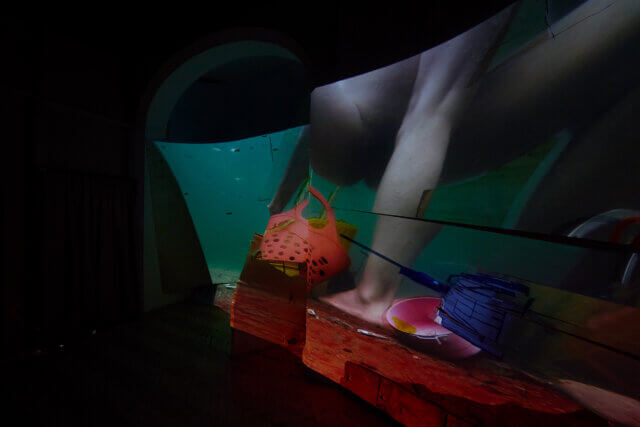 Dani and Sheilah ReStack Cuts in the Day