The exhibition included three characteristic large scale pieces made up of hundreds of individually and identically framed drawings incorporating numbers, calculations, handwriting, musical scores and images in grid formations; the results of her daily routine of ‘writing without describing’.

Images The Artist Supported by

Born in Hamburg in 1941 Darboven studied at the Hochschule für bildende Künste before moving to New York for two years in 1966. During her short time there her work became associated with the beginnings of conceptual and minimal art and she became good friends with Sol le Witt and Carl Andre, taking part in several group shows. In 1968 she moved back to her family home and although she continued to travel between Germany and America she spent most of her time there among her extraordinary collection of disparate cultural artefacts, books, music instruments and artworks until her death in 2009. Darboven’s works are both minimal and excessive in format, combining a personal repetitive rhythm with underlying mathematical systems. Seen from afar they resemble monumental wall drawings yet close up they evoke the emotive quality of the moment at which they were made.

In this sense all Darboven’s works relate to time and are potentially limitless. In the late 1960’s Darboven started using the calendar, a universally recognisable system for recording and measuring time, as the basis for numerous works. Onto this structure Darboven laid her own time, devising a constantly evolving system of calculations which uses the numbers in the date; days, months and years. From 1978 she started to incorporate visual documents into these works such as photographic images and assorted objects from her collection that she had found, purchased or received as gifts. In some works actual words are replaced by a form of abstract handwriting resembling graphic sound waves where meaning is replaced by a feeling of energy and duration.

Originally training as a pianist Darboven was fascinated by the abstraction of music and in the late 70s she devised a code where numbers taken from specific dates were assigned musical notes. The resulting drawings become musical scores which were then translated and played by musicians. Darboven’s vast and obsessive project suggests a deeper relationship with our time; evoking a sense of timelessness which is both personal and historical. 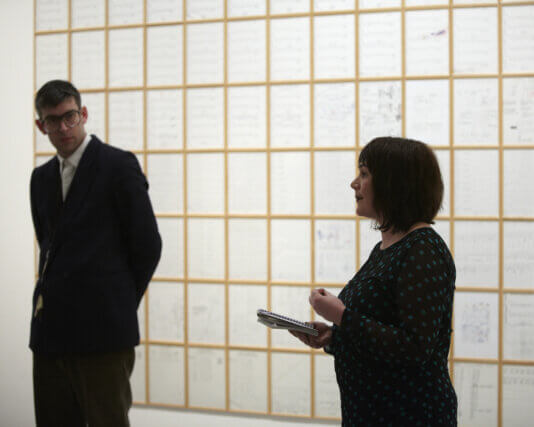