At the Still Point of the Turning World - Camden Art Centre

For this two-part salon event, Camden Arts Centre Exhibition Organiser Gina Buenfeld presents a programme of live performance, screenings of artists’ film, encounters with objects, and open discussion in the incomparable setting of SHIBAURA HOUSE. As a project that emerged from her 2014 curatorial residency with Arts Initiative Tokyo (AIT) and her ongoing research, At the still point of the turning world… (a line from TS Eliot’s Four Quartets) is a selection of works that proposes questions about sculptural and dynamic form with a particular focus on dance and ceramics – two craft traditions with a strong historical and contemporary presence in Japan.

If dance is considered as ephemeral movement, and ceramic sculpture as solid and unchanging in its materiality, Eliot’s words ‘Investing form with lucid stillness… With slow rotation suggesting permanence’ turn these opposing beliefs upside down, suggesting something unchanging at the heart of movement and re-location, an idea that could be applied to disparate locations (Tokyo and London) as much as challenging the various understandings of ‘form’ that we know in art now. Drawing out the tensions between seemingly inanimate objects and fugitive yet perpetually reiterated movement, this event approaches form across different registers to consider the varied ways in which its characteristics prevail, as they are re- expressed over time.

Eliot’s four musical moments were characterised by the seasons. The two acts of this event are inspired by the distinct theatrical atmospheres of both Noh and Butoh, and feature video works by international artists: Manon de Boer; Trisha Brown | Babette Mangolte; Jefford Horrigan; Joachim Koester; Simon Martin; Ursula Mayer; Jeremy Millar; Fernanda Muñoz Newsome and Ina Dokmo; Hiraki Sawa; Sriwhana Spong; a live performance by Mildred Rambaud who will be in Japan especially for this event; and contributions from AIT artists-in-residence Jesse Wine and Caroline Achaintre, who have been based in Tokyo since late January.

Watch an extract from Mildred Rambaud's performance Pot, 2008. This performance presents a solo dancer and an unfired clay pot filled with water. The visceral relationship that unfolds between these components and the gestures of the dance proposes classical form in relation to transformation and impermanence.

This event is part of Tokyo Correspondence, a collaboration which was established in 2014 between Camden Arts Centre’s internationally renowned artists’ residency programme and Arts Initiative Tokyo (AIT). The project seeks to strengthen connections between artists and institutions in London and Tokyo through a series of residencies and research visits.

This programme is supported by the Sasakawa Foundation, Department for Arts and Culture, Japan and the British Council in Japan 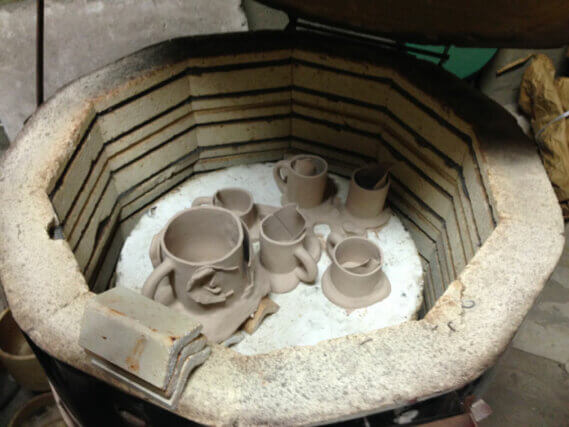