Two major figures in British abstract art, this was the first joint exhibition of Kenneth Martin and Mary Martin in a public gallery since 1971.

Kenneth and Mary studied painting at the Royal College of Art, where they met. At the heart of both of their practices was the idea of construction; this systematic approach allowed for chance and surprise.

The Martins were foremost among a generation of British artists which included Victor Pasmore and Adrian Heath who ‘rediscovered’ abstraction during the 1940s. Constructed Works looked at how they responded and experimented in corresponding and differing ways. Kenneth Martin’s mobiles from the 1950s – 1970s and his later Chance and Order series of abstract paintings were shown alongside Mary Martin’s relief sculptures and maquettes from the 1950s and 60s.

The Martins believed that art had a social role to improve life and worked on a series of public commissions; Mary made wall constructions for the Musgrave Hospital in Belfast and Kenneth’s Screw and Reflector mobiles were exhibited in a children’s ward at the Whittington Hospital.

Kenneth Martin referred to his constructions and mobiles as drawings in space. His largest mobile, commissioned by the Zoological Society of London in 1967, was specially restored for the exhibition. For Chance and Order, he drew lots to determine lines within grids, a system infused with arbitrary elements.

Mary Martin’s work embraced both hand-crafted techniques and industrial mass production. She used permutations determined by mathematical principals, such as the Golden Section or the Fibonacci sequence. 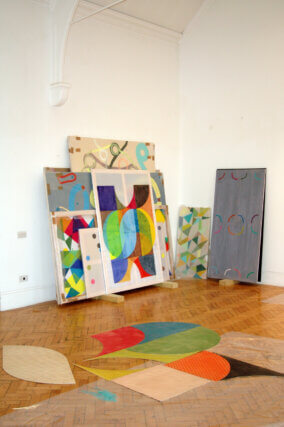