Sam Belinfante strikes together audio-visual technologies and their corresponding modes of thought.

Taking as his starting point the ancient Solfège system in music, which pairs notes of the scale with particular voiced syllables, Belinfante used his residency to unpick the relationships between the choreography of sound, language and technology.

Talk: On the One Hand and the Other

Camden Art Centre · Talk with artist-in-residence Sam Belinfante: On the One Hand and the Other, 2016

In this afternoon of talks, artist-in-residence Sam Belinfante invites artist Jayne Parker, Doctor Michael Kilshaw and conductor David Vinden to think about the voluntary and involuntary movements between sound, music and gesture.

Sam Belinfante strikes together audio-visual technologies and their corresponding modes of thought. Belinfante will use his residency at Camden Arts Centre to unpick the relationships between the choreography of sound, language and technology.

Jayne Parker is an artist and filmmaker whose work has been widely shown, both nationally and internationally, in major art institutions, on television and in film and music festivals. In 2003 she was the recipient of the 1871 Fellowship, researching the relationship between music and film, hosted by the Ruskin School of Drawing, Oxford and the San Francisco Art Institute. In 2008 she completed Trilogy: Kettle’s Yard, which premiered at The Times BFI 52nd London Film Festival. In 2011 she presented a retrospective of her films at the BFI Southbank as part of Maya Deren: 50 Years On. Parker is Head of Graduate Media at Slade School of Fine Art.

Michael Kilshaw is a GP living and working in Gloucestershire. He trained at University College London graduating in 2003. He studied for a degree in psychology during his medical studies. After training to be an orthopaedic surgeon Kilshaw changed careers to general practice. Michael has a particular interest in education and is involved in clinical teaching at undergraduate and postgraduate level. Michael has a passion for music and plays the trumpet for several orchestras in Gloucestershire, as well as being in the Chair of the Cheltenham Philharmonic Orchestra.

David Vinden is a lecturer, teacher and conductor and has been invited annually to teach on the Kodály Institute summer courses in Kecskemét, the Kodály courses at Westminster Choir College in Princeton, USA, and Kodály summer courses at Portland State University. Vinden has been a guest lecturer at the Liszt Academy, Debrecen and Szeged Conservatoires. He co-founded the Kodály Centre of London with his wife, Yuko, in 1992, and has produced and published over 30 books of Kodály musicianship material and teaching aids. He edited Music Transalpina I of 1588, the complete canons of Cherubini. He co-authored, with Cyrilla Rowsell, the 3rd volume of Jolly Music, which will be a 7 year curriculum of lesson plans and material for Primary schools published by Jolly Phonics, Britain’s leading phonics company.

Artist-in-residence, Sam Belinfante presents his current research around audio-visual technologies and the choreography of the sensory experience.

As part of his ongoing research into the ancient Solfège system in music, which pairs notes of the scale with particular voiced syllables, artist-in-residence Sam Belinfante invites London based Musarc to collaborate on a program of music exploring language and gesture within the choral tradition. Works include Arvo Pärt’s hauntingly beautiful Solfeggio, 1963 and a new arrangement of Terry Riley’s classic In C, 1964 using the sol-fa text.

This event also marks the launch of The Listening Reader, edited by Sam Belinfante and Joseph Kohlmaier (Musarc).

The Listening Reader brings together a number of essays that explore the role of sound and listening in the context of contemporary art. They engage with the speci c timbre that the act of listening, and the paradigm of sound bring to the practice of artists; how this paradigm is present within a broader discourse, including the creative arts, sciences, philosophy and politics; and how art that begins with, or requires listening circulates in the world of the art gallery.

The texts in this anthology emerged from conversations, talks, and performances by a number of artists, curators, and writers whose work was presented at, or contributed to the making and public programme of Listening, a Hayward Curatorial Open exhibition that toured the UK from September 2014 to March 2016. It includes previously unpublished essays and contributions from Ed Atkins, Sam Belinfante, Mikhail Karikis, Joseph Kohlmaier, Brandon LaBelle, Ed McKeon, Imogen Stidworthy and Laure Prouvost.

Musarc is one of London’s most progressive amateur choirs. It is at the heart of a research project at the Cass Faculty of Art, Architecture and Design which explores performance and composition in relation to the creative process and investigates listening in the context of society, architecture and the city. The ensemble regularly collaborates with composers to develop work that challenges traditional ways of making music, and brings together art, performance and education.

Musarc has performed at Cafe OTO, Bold Tendencies, Turner Contemporary and V22 and the Royal Maritime Museum. In 2012, it presented Bang! Being the Building at the Barbican’s OMA/Progess show, and its voices could be heard in Ed Atkin’s Us Dead Talk Love at the Chisenhale Gallery. In 2015, Musarc performed a choral version of Terry Riley’s In C and a new work by Neil Luck at MK Gallery in response to their show How to construct a time machine. Musarc’s voices could be heard at the New Museum, New York, in Laure Prouvost’s How to make money religiously (2014). More recently, the ensemble took part in a performance of Peter Liversidge’s Notes on protesting, and performed Sam Belinfante’s Corpus Sonus for voices and dictaphones, both at the Whitechapel Gallery. The choir has collaborated with experimental music label Entr’acte, with whom it is currently producing an album of four commissions from Neil Luck between 2010 and 2015, recorded at Extra City, Antwerp, in October 2015. For more information about forthcoming events, teaching programmes and how to join the ensemble, visit www.musarc.org.

Postscript: Sam Belinfante: On the One Hand and the Other

As a culmination of his residency at Camden Arts Centre, Sam Belinfante opens his studio to the public once more, as a way of ‘working though’ the various audio-visual material that has manifested there in the past few months. Belinfante puts into motion a series of looping gestures, with percussionist Mark Sanders, whose hands will respond to a series of signals both voluntarily and involuntarily.  As loops are added one-by-one to the space in an evolving series of projected movements, ideas will both clarify and obfuscate as objects and thoughts are incessantly repeated, becoming inevitably convoluted. 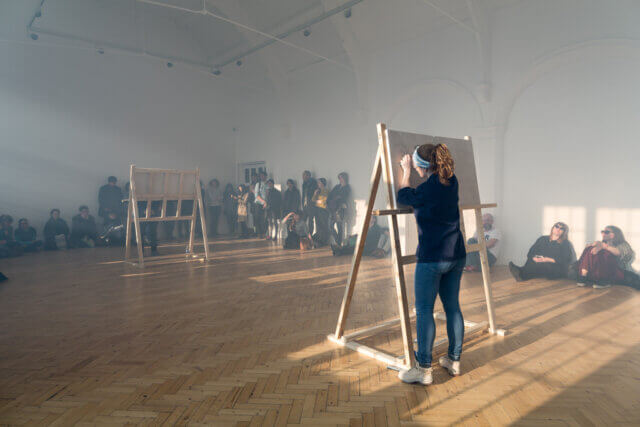 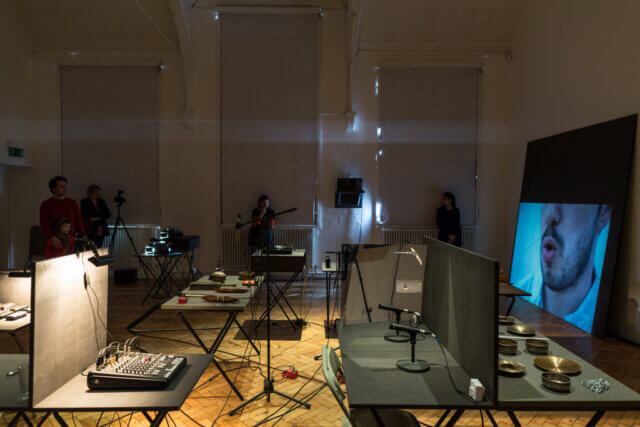 Postscript: Sam Belinfante: On the One Hand and the Other