Words after the World

Words after the World

Rwandan-born Dutch artist Christian Nyampeta works across art, design and theory in an ongoing enquiry into ways of living together.

Words after the World was a exhibition which builds on Nyampeta’s residency at Camden Arts Centre. During this time, Nyampeta hosted a scriptorium, in which he convened a working group to translate Francophone texts by philosophers such as Alexis Kagame and Maniragaba Balibutsa. This collective structure led to the production of the script for Nyampeta’s new film, which conveys a fictional writer attempting to complete a novella at a time when the use of existing words is restricted by copyright: as a result, the writer is compelled to craft new words in order to avoid both silence and persecution.

Nyampeta’s film is presented in Gallery 3 within an installation that he describes as a ‘hosting structure’. This encompasses murals across the gallery walls, furniture constructions, and a dossier reflecting on the process of producing the film script. Nyampeta creates a space for the study of the making and the communion of knowledge. He asks: what happens if words and meaning were subjected to prohibition? What synonyms could be created to replace them? The working group will continue to convene, to translate and to publish throughout the duration of the exhibition.

Christian Nyampeta (b. 1981) creates fictions, models, dialogues and commentaries, concerned with the difficulties of being in common. Recent contributions include Intimate Trespass: Hapticality, Waywardness, and the Practice of Entanglement––A Study Day with Saidiya Hartman, organised by Dr Rizvana Bradley and the Serpentine Gallery; Now is the Time of Monsters. What Comes After Nations? at HKW in Berlin; and Displacement and the Making of the Modern World at Brown University, Providence. Recent exhibitions include Space Force Construction, the inaugural exhibition of the V-A-C Foundation headquarters in Venice, co-organised by the Art Institute of Chicago. Nyampeta convenes the Nyanza Working Group of Another Roadmap School Africa Cluster. He runs Radius, an online and occasionally inhabitable radio station, and he is a research student at the Visual Cultures Department at Goldsmiths, University of London.

Supported by the Artists for Artists Fund, Embassy of the Kingdom of the Netherlands and Mondriaan Fonds

Stella Bottai is Programme Curator at Stanley Picker Gallery, Kingston University London, where she curates the Gallery’s programme of commissions, exhibitions and events. Recent exhibitions include 31 Candles: Jessi Reaves feat. Bradley Kronz, and P!CKER curated with P!, showcasing work by the late Elaine Lustig Cohen and Céline Condorelli. Between 2015-16, she focused on in-depth research and writing towards Goshka Macuga’s solo exhibition and artist monograph at Fondazione Prada, Milan (2016). She was Associate Curator of Over you/you, the 31st Biennial of Graphic Arts, Ljubljana (2015) and has previous experience working as Curator, Fiorucci Art Trust, London (2014-15); Assistant Curator, Frieze Projects London (2013-14) and Assistant Curator, Serpentine Galleries Public Programmes (2012). Prior to completing an MA in Curating Contemporary Art at the Royal College of Art (2013) she worked at White Cube, London (2006-09).

Nathalie Du Pasquier was born in Bordeaux in 1957 and relocated to Milan in 1979. Until 1986, she worked as a designer and was a founding member of the design group Memphis. In 1987 painting became her main activity. Between 1989 and 2008 she worked regularly with Le Cadre Gallery, Hong Kong, allowing her to develop from her early still lifes to more abstract compositions. Her work has been the subject of solo exhibitions, including The Fruitmarket Gallery, Edinburgh (1992) and Pace Gallery, London (2017). The first comprehensive exhibition of Du Pasquier, curated by Luca Lo Pinto was held at Kunsthalle Wien in 2016 and a second iteration will take place at the ICA Philadelphia in September 2017.

On the occasion of his exhibition Words after the World, Christian Nyampeta will be in conversation with curator Taylor Le Melle. The talk will focus on Nahum D Chandler’s notion of desedimentation first mentioned in his work Towards an African Future – of the Limit of World in relation to the temporal and geographic movement in translation. Nyampeta and Le Melle will consider these movements between French, English to Kinyarwanda and the sedimentation that happens with these translations of words which contain their own history, geography and philosophy.

In response to the current exhibitions, this three-week course led by Stephanie Sutton will examine how artists, designers and architects have responded to and often challenged dominant forms of urban and social space. Taking a chronological approach from 1945 onwards, it will introduce the idea of space as socially ‘produced’ – constructed and often contested by different groups over time. Alongside examples from architecture and design history, participants will also consider everyday practices which challenge and (re)produce space, such as playgrounds, self-build communities and local history groups.

Week 1 will introduce key ideas on space and place, focusing on the post-war city, self-build communities and the ‘right’ to inhabit and occupy land.

Week 2 will explore design for alternative living and sites of collective action. This session will consider how designers and practitioners were responding to shifting socio-political contexts, from post-war anxiety to the influence of pop culture in the making of radical alternatives.

Week 3 will examine how space can be represented, with a particular focus on the non-existent and imaginary. We will think about how different groups reimagine and relocate space and place.

Stephanie Sutton is a curator and researcher, working across art, design and architecture. Her research has focused on post-war architecture, urban history and the material culture of childhood. She has worked with organisations including RIBA, Focal Point Gallery, Camden Arts Centre, V&A Museum of Childhood and the Royal College of Art. Stephanie holds an MA in Design History from the RCA/V&A and will be undertaking a collaborative PhD at Queen Mary, University of London and the V&A Museum of Childhood, entitled Adventures in the City: The Politics and Practice of Children’s Adventure Play in Britain, c. 1955 – 1997.

Join us for a curator-led tour on the final day of the exhibitions. 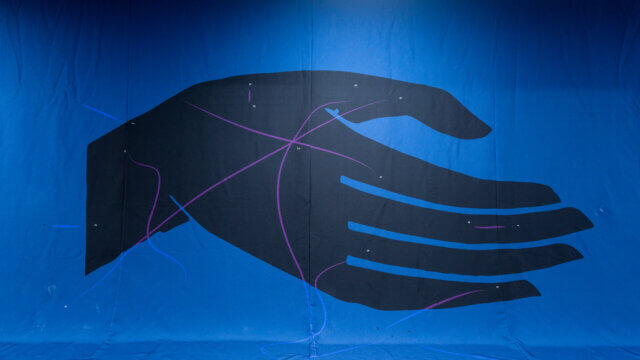